Social activist performance artist  ~Keith Alan Hamilton~,   the author of the book series Nature ~ IQ: Let’s Survive, Not Die! and as an artist who uses art to create change will again shuffle-jog a Virginia Marathon for THE HUMAN RACE while creating a body metaphor.

Keith will do this on March 20, 2016 at the Yuengling Shamrock Marathon along the Virginia Beach Oceanfront.   Keith in November 2015 ran his first marathon in Richmond, VA as a performance artist after losing nearly 100 pounds. 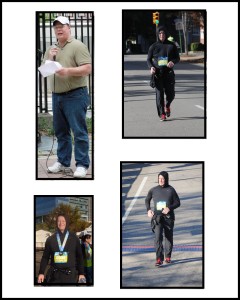 As with the previous marathon in Richmond, Keith will again meet the challenge in Virginia Beach by doing what he calls the Hamilton shuffle-jog.  Keith developed this style of running to accommodate his arthritic joints and his stout physique not built to race, long distances.  To add to the way his running style is perceived at the marathon, Keith will add to the overall effect of the experience by wearing dark clothes with a hood.  As an artist, who is a social activist, Keith uses art creatively to serve that purpose.  The story behind the backdrop of Keith’s age, his struggle to lose weight and get back into shape mixed with his shuffle-jog style and dark clothes work together to provide his unique rendition of performance art.  Creatively using his body and appearance as a metaphor, intended to inspire change firstly in his fellow social activist artists, and eventually all humanity in the way they perceive, think, communicate, and cooperatively go about solving social issues between one another. 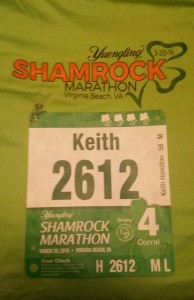 Keith performing this kind of body metaphor during a marathon race in Richmond and Virginia Beach on March 20th will further illustrate and promote the social activist message embedded in the art of his Slavery in America Image with Words Collection ~ Virginia Edition and his soon to be released book Peace Out Poems for World Peace, Healing & THE HUMAN RACE about the topic of RACE.

The setting of Virginia and its relevance to race, color of skin, slavery in America, and runners of all kinds participating in the one race of a marathon is the perfect stage for a social activist artist such as Keith.  His creative blending of performance art through a body metaphor at a race correlated to the images with words making up his art collection is a powerful way for an artist to deliver a social message about race.  A message with an underlying theme of humanity collectively realizing the benefit to all in decolorizing the ideal of race to one race, THE HUMAN RACE regardless of skin color, sex, gender, nationality, ethnicity, culture, and belief.  This kind of artistically creative social engagement is to metaphorically unearth the remembrance, bring back to light out of the darkness (the dark running clothes with hood) the history of slave trade in America that occurred in Virginia and America’s lingering perception about what defines race.  A unique way to shine light once again on the history of the African-American burial grounds in Portsmouth where Ida Barbour is laid to rest and on a small family cemetery in Deep Creek by the Dismal Swamp Canal.  A canal that was dug by slaves and where the memory of Moses Grandy freely breathes.  As well as resurrecting this buried history about slavery all the way to the slave trail in Richmond and the burial place that once had gallows, the place where a blacksmith named Gabriel was hung because of the color of his skin.

Art creatively used to resurrect metaphorically from the darkness, the buried inhibitions and predispositions about the color of skin and its effect on how fellow human beings are perceived.  Hopefully by bringing this all to the surface through the creative act of art, to be aired out, and confronted through the healing process of dialogue.  It will lead to the acceptance of deeds past and then motivate the spirit of change that will lead to the betterment of all THE HUMAN RACE. Therefore, developing a humanity that’s cooperatively engaged, a united RACE as one working together to run the RACE of LIFE and to ultimately win the right to survive, regardless of skin color, sex, gender, nationality, ethnicity, culture, and belief.

Keith firmly believes, “The true act of creating art is to use it to create change for the everlasting benefit of all humanity.” He hopes his fellow social activist artists will be encouraged to use art in the same way.

~Keith Alan Hamilton~ is a Pro-Human, Social Activist Performance Artist and Mystic Philosopher. The full emergence of Keith’s artistically creative and socially proactive lived experience includes being an Author/Writer (Poet), Publisher and Editor. He is the creator of the book series Nature ~ IQ: Let’s Survive, Not Die ! The Images with Words Series: on the Road with ~Keith Alan Hamilton~ and the Muse Series. Keith is a fervent promoter of other social activist artists at The Hamilton Gallery ~ Online. Keith writes a spiritually philosophical blend of poetry and prose that’s often further pictorialized with his Smartphone photography. Keith is also an exhibited social activist artist and draws attention to the PRO-HUMAN message flowing within his creations through the act of performance art. While participating in charitable and athletic events, Keith artistically creates a body metaphor (wearing dark clothes with a hood) to bring back to light out of the darkness, to air out, and confront through the healing process of dialogue, those inhibitions and predispositions that work against finding any cure for societal ills. Read further about   ~Keith Alan Hamilton~  View all posts by ~Keith Alan Hamilton~