Janet wrote her first poems and short stories in an old diary where she noted her daily thoughts.  She wrote whether suffering, joyful or hoping for peace in the world.  She started this process at the tender age of Eight.  This was long before journaling was in vogue.  Along with her thoughts, poetry and stories, she drew what she refers to as Hippie flowers.  Janet still to this day embraces the Sixties and Seventies flower power symbol, of peace and love, which are a very important part of her consciousness.

Janet wrote her first book, in those unassuming diaries, never to be seen by the light of day due to an unfortunate house fire.  This did not deter her drive.  She then opted for a new batch of composition journals and filled everyone.  In the early nineteen-eighties, Janet held a byline in a small newspaper in Denton, Texas while working full time, being a Mother and attending Night School.

Since the early days Janet has been published in newspapers, magazines and books globally.  She also has enjoyed being the feature on numerous occasions, both in Magazines, Radio and on Several Web Sites.  She has gone on to publish three books. 5 degrees to separation 2003, Passages 2012 and her latest book Dancing Toward the Light

Foreword for the upcoming Anthology dedicated to Janet Perkins Caldwell 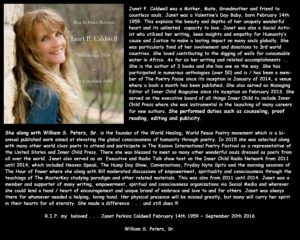