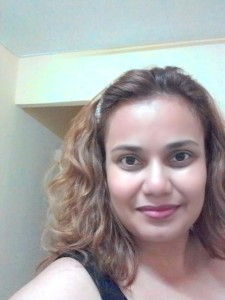 I am a woman who is trying hard to live in such a harsh world which took me to a different level of self-consciousness, respecting humanity and acts towards kindness without hesitation.  I stand against malevolence, war, acts of killing, poverty and I do believe in DOING GOOD IS THE WAY TO LIVE GOOD.

I found the path of humanity, compassion, sincerity and honesty is the path to embrace peace and giving peace to others too.  My focus is altered for good and to reach the best in my sense of humanity, I made a pledge to stand for kindness and act to prove my intentions.  I am getting active in doing acts of charity in order to help the needy, the poor and the people who need help but they’ve been ignored and rejected by other institutions.

As an advocate and solicitor, ex-banker and litigator, I know justice might be unreachable for the poor and for that reason, the poor and the less-fortune in society tend to be downgraded and their life is almost insignificant to the financially strong and influential people.  Some people use their charity organization to have more privileges for themselves but not the poor.  I have experienced hardship and know much about the hindrances and obstacles of the poor to be able to mobilize their life and get them the help they need.

Currently I am a businesswoman with a little international trade business and the founder and Secretary General for Humanity Al Falah since 2009 ( Persatuan Kebajikan Insan Al Falah Kuala Lumpur dan Selangor). This is an association for charity and non-profit organizations registered in Kuala Lumpur, Malaysia in the year 2011.  The organization is actually based on my travelling experiences to the poor and war torn nations in the Africa region (few countries including Benin, Chad, Cameroon, Mozambique) and Asia Sub-Continent including North West Frontier- Khyber Pakhtunkhwa (FATA) Pakistan-Afghanistan to plan for a distribution of medical supplies to fight malnutrition, lack of vitamins and medicine for other vector diseases.  I made my real and on ground assessment with victims of the natural disaster and war which bring me to a conclusion that I must stand up for humanity in words and in action.  To causes, at my own cost I contributed to some trusted people to assist me in providing some medicine/books, food and clothes.  I am assisting the unlisted poor in every place visited including the current domicile (Malaysia).

I am one of the hosts at ~ Unity Renaissance of Consciousness ~ The UROC Globosity Initiative, it was envisioned as a response to mounting tension in the world for the effort to promote peace and ease suffering.  It is based in the belief that we share localized consciousness.  This is not connected to any religion, but does recognize a universal life force to unify man and race for peace.  Later on I was named to the founders Circle in “Global Community Designs” registered in the United States of America with an endeavor and venture to encourage a paradigm of healing and protection of the universe and mother-earth as having worth and being precious.

I raised the idea and organized an international poetry competition for charity ” Poetry To Aide ” with technical support from a movement named “Poets and Artists for a Different World Movement” (where I am one of the appointed founders).  The theme is against War and Poverty and I do hope this joint effort could trigger awareness and consciousness to reduce the act of war, and together poverty could be reduced. Everybody deserves a good life with better opportunity for education, safety and peace.

With love, please forgive me and I love you .
MALAYA ROSES 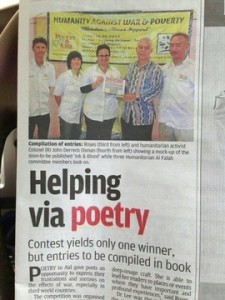 Recent achievements of Malaya Roses ( Rosemawati Nor Mohamed ) as a humanitarian and activist:

Read some of Malaya Roses poetry below and then more here: http://malayaroses-com.webs.com/apps/blog/categories/show/1675109-my-ink 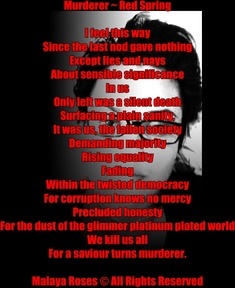 With or without you
This journey
Deem to devour my finale
Black brown soil
Life is not absolute
Love hush lie rushed
Compassionate reverie amongst greed
Covetousness takes us deep
Run still
Silencing the truth within
And we become the coward.

Talk is cheap
Words is small
Signification was disqualified
Human appearance was disconsolate
Via act
I shall mark your value!!!

No Oath in Despair

This is the shadow
Fragment from the dawning breeze
Whisper me a gasp
Surviving blades was the past damnation
Some said redemption was made,
Created for the heinous to repent
Doubted but never adjudicated
Samsara or karma
Colours and oceans
Plunged to a human muddy tongue
A lover goes less than life
Impugned a wave
With last drop of red,
Flowers of salvation rose
Left no undone oath in despair
Pledge to save the world
Keep the heart of titanium alive
Standing for the mother’s soil
Moulding the unresolved
Words dispersed on my feet, motionless
For this fate is going desolated
Saving my insignificant existence
Unaided, ribs fear nothing, no more
World against the truth
I shall regain the claim
Challenge the majority
Remain minority
For unity is the unknown race.

We create no enough words about world, picturesque life.
Jump higher than the first sky to grasp the moon, dream is burning.
Bring it to the chest, over my breath.
Light never reach home.
Seeking you is finding air without silhouette, impossible.
Mind, heart and love full of ruses, almost no truth will prevail,
no more. Despair.
To hold veracity I had thrust your motivation, greed is the never ending thirst.
Fallacy is falling, fast and harsh.
None could save such deception from this crash, scatter and death.
For justice will be served, fearless and blunt.